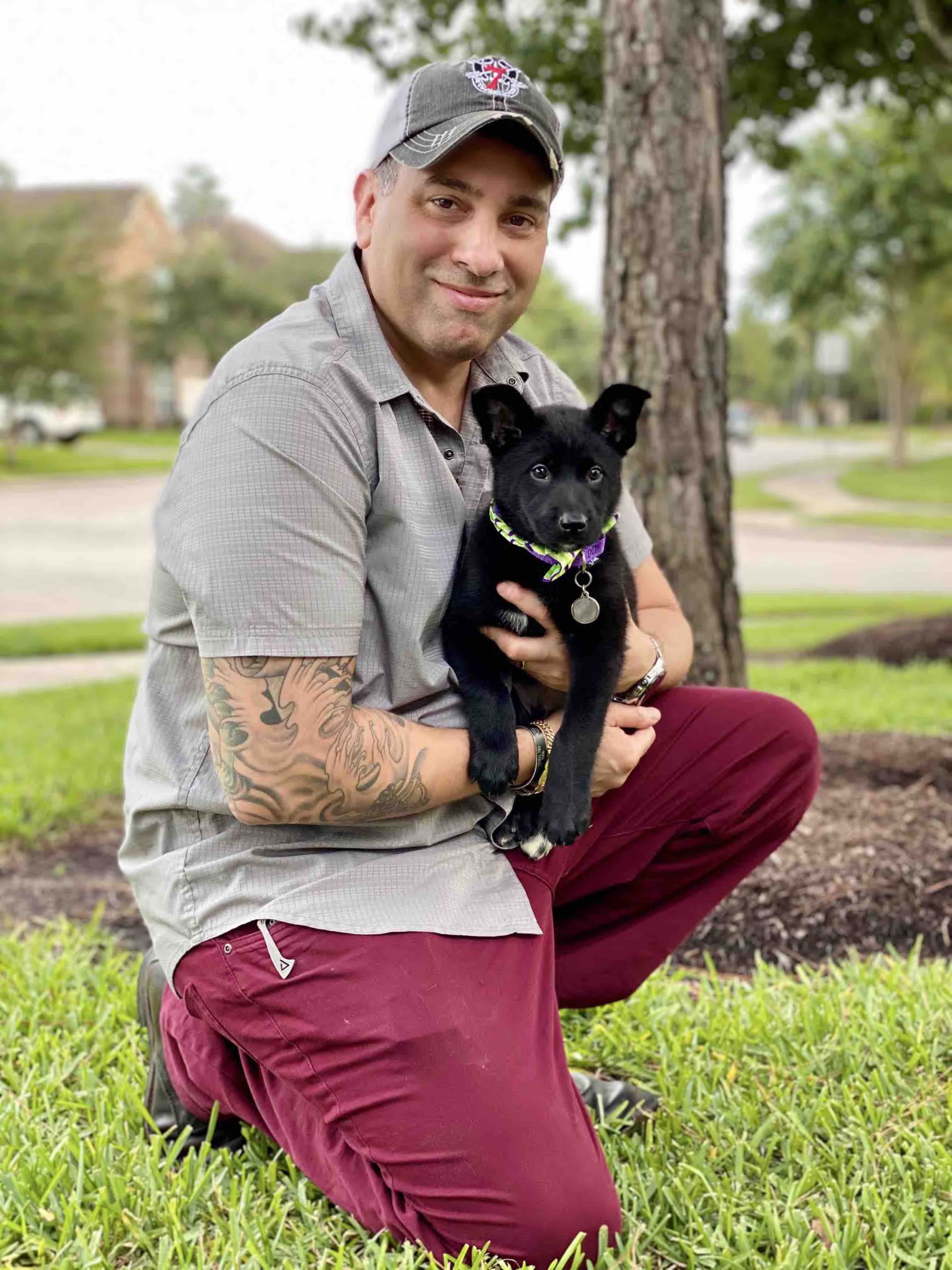 Through her work with our nonprofit organization, The Malinois Foundation, Whitley has brought joy, happiness, and support to the life of U.S. military veteran Juan Perez, in the shape of a darling, furry bundle of love!

Throughout his service, which included deployments to locations including the Southern Cone of South America and Southwest Asia, JP conducted special operations tasks with numerous professionals from the U.S. Special Operations Forces, as well as with allied special operators and other government agencies. He received a multitude of decorations and honors including two Bronze Stars, the Combat Infantryman's Badge, and two Army Commendation medals, not to mention a number of foreign decorations.

Shortly after retiring from the Army, JP began to experience symptoms of PTSD caused by his years of exposure to combat. These symptoms, which included an inability to sleep and a feeling of constantly being on alert, were mitigated in 2016 when he adopted Badge, a retired Malinois police canine from the Scottsdale, Arizona Police Department. Not only did having a service dog like Badge allow JP to feel more relaxed and able to sleep at night, but he also helped him maintain an active lifestyle, getting him out of the house and on hikes in nature for several hours a day, two to three days a week.

Sadly, after just two and a half short years, JP discovered that his companion had an aggressive form of cancer. Badge passed away near the end of 2018, leaving JP without a service dog- and a four-legged best friend.

Heartbroken over the loss of Badge but determined to find a new animal companion who could help him manage the everyday symptoms of his PTSD, JP learned about the Malinois Foundation and decided to reach out for assistance with locating a Belgian Malinois or German shepherd service dog that he could call his own. Unfortunately, locating an available dog seemed like it would be no easy task. "We found that most breeders had months-long waiting lists and it looked as though we may not get Juan a puppy until December!" recalls Cheatham, who owns a Dog Training Elite franchise in San Antonio, Texas.

By sheer coincidence, the greatest news came to Cheatham unexpectedly, in the form of a Facebook post. "I had been casually following a Belgian Malinois breeder for several years on Facebook and they happened to post about a litter and mentioned that they had a male puppy available," she said, adding, "This NEVER happens! Typically puppies are spoken for before they're born."

Using the skill and expertise that owning a dog training business has lent her, Cheatham reached out to the breeders to inquire about the puppy's temperament and whether he would be a good candidate for a service dog training program. Upon confirming that he would, JP, the breeder, and Cheatham all moved forward with the process of bringing the puppy home.

They weren't quite out of the woods yet, however: they still had one major roadblock to face in the form of COVID-19. "The puppy was located in Illinois, and Juan is in Texas," Cheatham explains. "Normally we could just have a puppy flown in cargo and it would just be a matter of driving to the airport. Unfortunately, due to COVID-19, airlines are currently not allowing animals to be shipped in cargo."

Where other dog training business owners may have given up, Cheatham persevered, deciding to make the road trip from Texas to Illinois herself.

With her two adult dogs, Flirt the German Shepherd and Malice the Belgian Malinois, by her side, Cheatham embarked on a 2,200-mile journey to unite JP with his new best friend. After leaving San Antonio at 4:00 AM on a Friday, Whitley and her dogs met Rex, the Belgian Malinois puppy, that night after a 16-hour drive. Less than 12 hours later, Cheatham, Flirt, Malice, and Rex hit the road for home- a trip that would take them across four states- before finally arriving at JP's home.

Using our proprietary dog training method and our Service Dog Training program, the qualified instructors at our dog training business will work with JP to train Rex as a service dog who can help him manage his PTSD symptoms and live a rich, full life with his new best friend!

Whitley is proud to have been an integral part of JP and Rex's story, and loves owning a dog training business that gives her an opportunity to make such a profound difference in the lives of deserving veterans and loving dogs alike. "This is just the start of Rex and Juan's journey, and we are honored to be able to be there from the very beginning and watch this partnership grow and change Juan's life," she says.

If you are looking for a franchise opportunity that allows you to give back to military veterans while also enriching the lives of dogs (and dog owners!) in your community, it's time to look into Dog Training Elite! Our dog training business has over 40 years of experience helping to strengthen the bond between dogs and their people. Visit our franchise website today to learn more.